Abuse Claims Experts at Watson Woodhouse Solicitors continue to fight for justice for the victims of Medomsley Detention Centre following the Ministry of Justice agreeing on a compensation scheme. 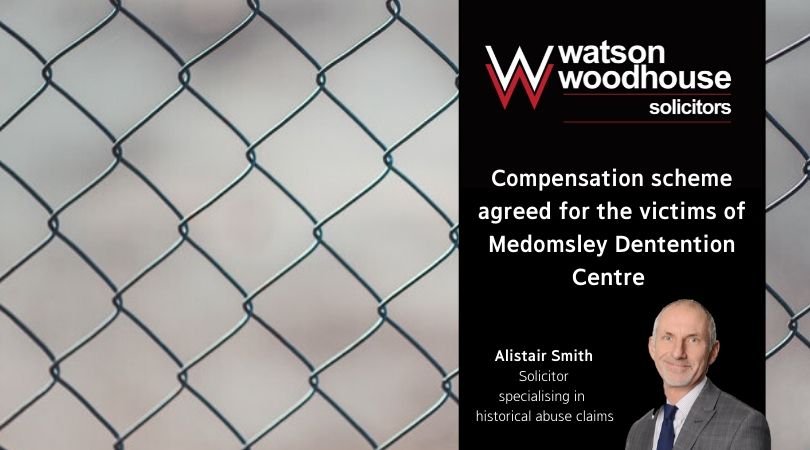 Alistair Smith and the Abuse Claims Department at Watson Woodhouse Solicitors have been leading the fight for justice for the victims of Medomsley Detention Centre and welcome the Ministry of Justice’s move to set up the Medomsley Compensation Scheme.

Medomsley Detention Centre was a prison for young male offenders from 1961 until the late 1980s, providing a place for young offenders aged 17-21 to prevent them from being sent to a mainstream prison. At Medomsley, during their stay of usually around six to eight weeks, some inmates were subjected to sexual, physical and mental abuse from prison officers.

Alistair and the team at Watson Woodhouse have helped many Medomsley victims in their fight for justice and compensation for the abuse they experienced. Now, after months of discussion with the Ministry of Justice, the Medomsley Steering Group, who represent over 1000 claimants, have agreed on a settlement scheme designed to help provide compensation to former Medomsley inmates affected by the abuse that occurred.

How does the Medomsley Compensation Scheme work?

The scheme provides an amount of compensation relative to the length of time an inmate was detained. There is a provision in the scheme to compensate for lasting injuries, physical and psychological, so long as there is medical evidence to support the claim.

To be eligible for the scheme:

Under the scheme, physical abuse is defined as “the direct application of unlawful force”. Therefore punishments such as being ordered by Officers to run the perimeter fence or being made to perform bunny hops will be excluded from the scheme.

The scheme will fall into three categories:

Long lasting injuries are injuries that have lasted for a significant period of time beyond the time of detention. This can include fractures, dislocations, scarring, and emotional injuries such as depression and Post Traumatic Stress Disorder. You must provide medical evidence to support your claim.

To date, the members of staff who have received a criminal conviction are:

In November 2020, there will be another criminal trial involving Ian Nicholson and Alexander Flavell.

How Watson Woodhouse Can Help

At Watson Woodhouse, our solicitors have acted for many victims of historical abuse and understand the trauma survivors have to deal with on a daily basis. We deal with all cases in a sensitive and confidential manner, with both male and female solicitors available to provide advice and support on a ‘No Win, No Fee’ basis. With Medomsley Detention Centre and other historical abuse cases we will not be deducting success fees from claimant’s awards, so our clients will keep 100% of the compensation they are awarded.

If you have been the victim of abuse at the hands of Medomsley Detention Centre and would like our support to take action, you can speak to Alistair Smith, or another member of the team by calling us today on 01642 247656.

Need our help with Ministry of Justice Agrees Medomsley Compensation Scheme? Don't worry fill in
the form and we will be in touch